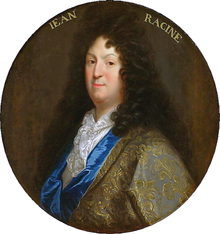 For Racine, love closely resembles a physiological disorder. It is a fatal illness with alternating moods of calm and crisis, and with deceptive hopes of recovery or fulfilment (Andromaque, ll. 1441–1448; Phèdre,the final remission culminating in a quick death. Relieve “pangs of despised love” by having (or, in Phèdre’s case, allowing) death. Thus the association with suffering. A Jansenist by birth and education, Racine was deeply influenced by its sense of fatalism.  Jansenism was a Catholic theological movement, primarily in France, that emphasized original sin which has been Racine’s tragic vision. The quality of Racine’s poetry is perhaps his greatest contribution to French literature. His use of the alexandrine poetic line is considered exceptional in its harmony, simplicity and elegance. But, being a Christian, he could no longer assume, as did Æschylus and Sophocles, that God is merciless in leading men to a doom which they do not foresee. Instead, destiny  becomes (at least, in the secular plays) the uncontrollable frenzy of unrequited love or  force of sexual passion within the human being; in Racine, a characteristic of tragedy, is not merely an action performed in all good faith which subsequently has the direst consequences (Œdipus’s killing a stranger on the road to Thebes, and marrying the widowed Queen of Thebes after solving the Sphinx’s riddle), nor is it simply an error of judgment (as when Deianira, in the Hercules Furens of  Seneca the Younger, kills her husband when intending to win back his love); it is a flaw of character. His tragic characters are aware of, but can do nothing to overcome, the blemish which leads them on to a catastrophe. And the tragic recognition, or anagnorisis, of wrong-doing is not confined. His main characters are monsters, and stand out in glaring contrast to the regularity of the plays’ structure and versification. His conception of the ambivalence of love: “ne puis-je savoir si j’aime, ou si je haïs? I don’t know if I hate you or love you.” Racine’s work faced many criticisms from his contemporaries. One was the lack of historic veracity in plays such as Britannicus (1669) and Mithridate (1673). Racine was quick to point out that his greatest critics – his rival dramatists – were among the biggest offenders in this respect. Another major criticism levelled at him was the lack of incident in his tragedy Bérénice (1670). Racine’s response was that the greatest tragedy does not necessarily consist in bloodshed and death.