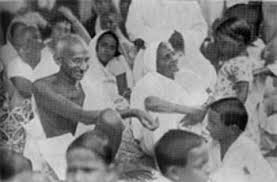 Gandhi’s main concern. Harijan God’s people–was the name given by Gandhi to the untouchables. He started an All-India Anti-untouchability League in September 1932 and the weekly Harijan in January 1933 even before his release. January 8 1933 was observed as the “Temple Entry Day”. Not satisfied with the progress, Gandhi suddenly decided to fast for 21 days, starting from May 8, 1933 for self-purification. The fast, however, induced the Government to release Gandhi who in turn decided to suspend the Civil Disobedience movement for six weeks. In July 1933 when Willingdon rejected his peace offer, Gandhi launched an individual Civil Disobedience movement on August 1. He was arrested and confined in jail. The spark of individual satyagraha enlivened the political life of the country. As Gandhi was refused facilities in prison for promoting the cause of Harijan, he began a fast unto death on August 16, 1933. He was released unconditionally on August 23. He decided to abstain from political activity and to devote himself to Harijan work. In November 1933 Gandhi set out on a long tour, covering 12,500 miles, to promote the Harijan cause. He pleaded for the opening of temples to Harijan “temples are for sinners, not for saints.”  In his triumphal progress, Gandhi attacked age-long tyranny and roused the Harijans to the consciousness of their rights. Rajagopalachari summed up the significance of the Harijan campaign by observing “Untouchability is not yet gone. But the revolution is really over and what remains is but the removal of the debris.”

Harijan means untouchables such as sweepers who were uplifted during the great Satyagraha movement in British India.