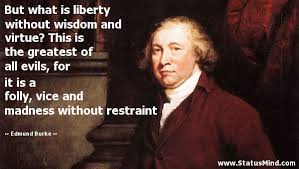 (Without wisdom, and without virtue liberty is the greatest of all possible evils; for it is folly, vice, and madness, without tuition or restraint.) 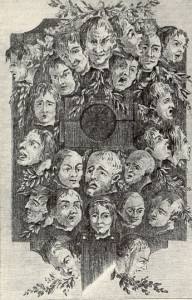 Heads that rolled and undoubtedly again

Reign of Terror:-This image shows the guillotine surrounded by the heads it has been responsible for removing. Although the print is sinister, its caption states that the Terror is dreadful, but necessary. This was a commonly held belief in 1793-1794 when the guillotine was a means of purging France of those who were deemed a threat to national security. For more information on the guillotine click here.

Reign of Terror lasted from September 1793 until the fall of Robespierre in 1794. Its purpose was to purge France of enemies of the Revolution and protect the country from foreign invaders. From January 1793-July 1794, France was governed by the Committee of Public Safety, in which Danton and Robespierre were influential members. In the course of nine months, 16, 000 people were guillotined, but executions of those labeled “internal enemies” of France took place throughout the country.

During this time there was a shift in power within the committee from Danton to Robespierre. Danton had a strong physical presence and was an incredible public speaker, while Robespierre was less passionate. However, Robespierre was a hard worker who was very ambitious. He blindly believed in the work of Rousseau, who argued that men are all born good at heart and are corrupted by society. It was these beliefs that caused him to continue the Terror even when it was no longer necessary.

In 1794, the armies of France were very successful against their enemies, which meant that the Terror was no longer necessary. But Robespierre continued the Terror because he wanted to purge France of everyone who was corrupt. The killing ended when Robespierre was executed on July 28, 1794.

http://www.history.com/topics/french-revolution/videos/robespierre-and-the-reign-of-terror click here for more fascinating videos on the topic.